An electrical resistivity investigation was conducted for proposed development at a site in Long Beach, California to delineate the surface trace of the Newport-Inglewood Fault and possible splays associated with it (collectively referred to as the NIFZ). The site was adjacent to a marine channel and consisted of marine sediments that were saturated 6 feet below ground surface. A concern for this project was the presence of several active oil wells and a few shallow utilities in the area of investigation, as these could cause interference in the electrical resistivity data. Because of this concern, Spectrum used utility locating methods to locate and mark shallow utilities at the Site and generated a detailed site map of cultural features at the Site.

Spectrum collected Schlumberger DC electrical resistivity data along two parallel 220-meter (722-foot) transects using AGI’s Sting/Swift resistivity system, four-meter cable and an array of 56 electrodes. As anticipated, the presence of the oil wells and utilities did not preclude the use of the electrical resistivity method. The electrical resistivity data along Line 1 revealed three anomalies extending from depth to the near surface, which were interpreted as the Main Fault (Station 92) and two splays of the fault (Station 64 and Station 168). Using the interpreted resistivity sections, an interpretation map was generated that identified the trace of the Main Fault and fault splays in the NIFZ, in accordance with the Alquist-Priolo Act. A subsequent marine seismic investigation in the adjacent channel conducted by Legg Geophysical confirmed the presence and location of the identified faults. 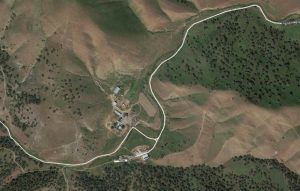